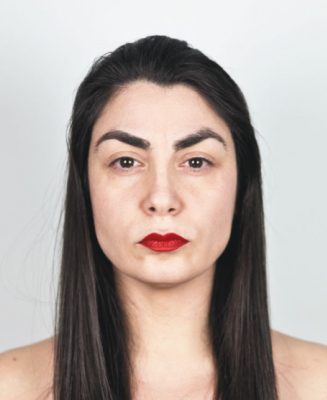 ■ Monica Mura (Cagliari, Italy,1979). Interdisciplinary artist and performer. She grew and studied in Italy where she obtained her title of Dottoressa magistrale in D.A.M.S., Discipline dell’Arte, della Musica e dello Spettacolo with Speciality in Multimedia Language by the University of Torino. Her work has been selected for national and international individual and collective exhibitions: Thyssen-Bornemisza National Museum of Madrid, MAC Museum of Contemporary Art of A Coruña, Museum of Pontevedra, House of Arts of Vigo, San Paio de Narla Fortress Museum (Spain), Sala Dogana – Palazzo Ducale, Palazzo Grillo of Genova (Italy), José Malhoa Museum of Caldas da Raihna (Portugal), amongst others. Standing out among her more recent individual exhibitions is Who(se) are you?, a multi-sensorial route through the milestones of her artistic research on power and control, that shows the evolution of the reflection on memories, genders and identities from the paradigm of Intersectionality, in the Compañía Church of Santiago de Compostela in 2018.

In 2015 she was chosen to be a part of Nos+Otras: en Red (Us+Others: in Network), a project integrated in the program Education and Social Action of EducaThyssen. In 2017 she participated in the exhibition The space of the memory, curated by Ana Moreno Rebordinos, in the Thyssen- Bornemisza National Museum of Madrid with her work Sas Diosas. Miradas, sa arèntzia mea (The Goddesses. Glances, my family) whose starting point is the artist’s research on resilience and idiosyncrasy, and with the project El Retrato. Abriendo la puerta a nuestro lugar más íntimo (The Portrait. Opening the door to our most intimate place), a proposal in dialogue with one of the most emblematic works of the permanent Renaissance collection in Florence, Domenico Ghirlandaio’s (1489-1490) Portrait of Giovanna degli Albizzi Tornabuoni, in which the artist portrayed and worked with more than 50 people through a creative laboratory to develop a critical reflection starting from the concept of portrait as a form of control, cataloging and discataloging, having the opportunity to be a part of a pioneer project for three years that founded the bases to build a space of permanent creation to work and reflect on the questions of gender in the field of museums, culture and heritage, which received the Honorable Mention of the VIII Premio Iberoamericano de Educación y Museos.

She has been invited to carry out her action projects in venues of recognized prestige such as the XX Biennial of Art of Cerveira, 2018, the Gaiás Museum Centre of the Cidade da Cultura of Galicia, 2018, and the Museu Jose Malhoa, Caldas da Raihna, 2015. In 2018-2019 she participated in different performances directed by the artist Esther Ferrer in the Palace of Velázquez of the Reina Sofía National Museum Arts Centre, Madrid. She is member of the MAV Women in the Visual Arts Association, and has participated in projects of fight against gender violence and to promote the visibility of women in cultural production (Violence Zero, Deputación of Pontevedra, curated by Paula Cabaleiro, No more dyed bedsheets, Concello of Ribadavia, MMM Mujeres Mirando Miujeres (Women Watching Women), Cultur3 Club, V National Fair of Artists, Gijón, Be present, be visible, ARTSevilla, International Meeting of Contemporary Art, Seville, Spain, No una di meno, Tonio Theatre, Lanusei, Italy). Her work is present in public and private collections, such as the Provincial Museum of Lugo and the Museum of Contemporary Art Florencio de la Fuente of Huete.